Best Foods of Pakistan To Eat When You Are In Pakistan

Pakistan was established in 1947, but the food in that region goes back thousands of years. Therefore, comparing Pakistani cuisine to Indian cuisine seems almost natural. But the Pakistani cuisine itself is as complex and varied.

The land in Pakistan is fertile and rich in agriculture. Rice in Pakistan is widely regarded as being amongst the best in the world, with long grain basmati rice used especially in biryani dishes. Also, Pakistani’s passion for food is obvious in his vibrant and flavorful cuisine. Moreover, they enjoy eating.

Foods of Pakistan are rich and second to none in their taste, spice, and they are tremendously delicious; and this quality food of Pakistan makes it famous worldwide. Pakistan is known for its spicy and fried food.

Why Do People Love Foods of Pakistan?

Food is like a religion in Pakistan, and you can eat whatever you want at any time. The culture and people in Pakistan are incredibly diverse. Culture in Pakistan is rich in tradition, with a variety of delicious dishes.

Some dishes, such as Haleem, are slow-cooked. Moreover, certain areas of the city are known for separate dishes. Adding pomegranate seeds to some meat dishes adds a sweet, sour note that reflects the Middle Eastern influence on the foods of Pakistan.

The tandoor oven is also a tradition for cooking bread and meats like chicken and lamb in Pakistan. Foods of Pakistan have these unique features that make them famous and loved throughout the world.

Foods of Pakistan are full of taste, and they are famous throughout the world. Here we are going to describe in detail some famous and regional foods of Pakistan.

Nihari (The National Food of Pakistan)

Nihari begins as a heap of dry spices frying in vegetable oil and animal fat. Indeed, it contains ingredients (most commonly beef shank), and a very healthy portion of Desi Ghee (home-made local clarified butter). The slow-cooking stew is then stirred altogether in a glorious cauldron of a pot.

It is one of the most popular and beloved foods of Pakistan. Usually, Its stew juices are mops up with naan, kulcha (leavened bread, famous in Lahore and Amritsar), or roti (flatbread). Moreover, Gar products of nishes such as ginger, garam masala, lemon, caramelized onions, cilantro, or mint enliven the taste.

Biryani and Pulao have seemed alike, but they are pretty different. Pulao has all of its ingredients fried together in the oil, whereas each spoonful of steamed Biryani can be unique. Other recipes and tastes exist in different regions of Pakistan, but the two most known Biryani creators are Lahore and Karachi.

Interestingly, the most well-known fact of Pakistani Biryani is the rivalry between Karachi Biryani and Lahore Biryani. On the other hand, Biryani is an intricate rice dish made with layers of curried meat and rice. Given its use of adornments and luxurious finishes, it’s no surprise that Biryani has roots in Persian cuisine.

Indeed, the different ways to prepare Biryani make it excellent Pakistani food. When you’re in Karachi, you don’t want to miss the Bone Marrow biryani. Also, the Nova Biryani in Garden Town, Lahore is a famous biryani spot.

BBQ made in Pakistan usually involves spices that are unique and tasty spices that make it more delicious. Among the most popular products are Tikkas and Kababs. Both are available in chicken, beef, and lamb varieties.

A ‘kabab’ is a particular kind, and the main difference between a ‘kebab’ and a tikka is the size of the marinated meat pieces. For instance, Kabab meat is usually minced and then seasoned and formed onto the skewer by hand.

One of the best places to eat in Pakistan for desi cuisine, Lal Qila serves a wide selection of food, from spicy curries to tasty barbecue. There are many branches to it.

Some sweets are the same or are similar to Indian sweets due to the two countries’ shared cultural heritage. The List of famous desserts in Pakistan are:

Zarda, a yellow-colored and fragrant Pakistani rice dish made from basmati rice cooked with sugar and milk have a sweet and aromatic taste.

A blend of spices along with rice and natural food coloring gives it a yellow look. Moreover, traditional spices such as cardamom and cinnamon enhance their taste.

It is a traditional dessert popular throughout South Asia, mainly in Pakistan, India, Iran, and Afghanistan. This halwa variety contains nuts such as pistachios, peanuts, almonds, walnuts, and aromatic flavors like cardamom.

After cooling, the halwa develops a hard, candy-like texture. For decades, Pakistani people have been craving this sweet treat.

In Pakistan, Shahi Tukray, an imperial dessert originally from Mughal cuisine, is famous as the emperor’s morsels.

In this dessert, crispy fried bread dipped in a warm sugar syrup balanced by cardamom- and saffron-infused milk sauce rich in almonds and pistachios.

Malai laddu is a traditional Pakistani and Indian milk dessert flavored with saffron and cardamom.

Typically, this recipe is made with a mixture of malai (milk cream), crumbled paneer cheese, chopped nuts, and powdered sugar flavored with saffron and cardamom.

Habshi halwa is a traditional dessert in Pakistan and India made of milk, sugar, sprouted wheat, ghee, aromatic spices, and nuts.

Among the things that make Punjabi food so unique is its variety. Even as meat lovers can never get enough of Butter Chicken, Bhuna Gosht, Tandoori Chicken, and Amritsari Macchi, vegetarian fare is equally delicious.

Also, Sarson ka Saag, Chole Bhature, and Dal Makhni are just a few vegetarians. Indeed, Punjabi specialties are popular across the globe. The land of Punjab produces different ingredients and contains microcosms of cultures that have developed other dishes we eat today.

Here, we have a look at famous food products made in Punjab.

Indeed sag is the most common dish you can find throughout the Punjab of Pakistan and India. People also call it ‘greens and spices,’ famous all over Pakistan and North India. Sabzi is a traditional dish made from wilted greens, including spinach and mustard greens and herbs and spices.

Usually, flatbread is served with it, topped with a dollop of fresh ghee. People love to serve Makke ki roti with Sarson ka saag. It is a popular Punjabi dish made from cornmeal and cooked on an open flame.

Lassi is the most common drink of Punjab. It can win over the taste buds of anyone. Indeed, it is something Punjabis pride themselves in. A salty version of it is also available, but it cannot replace the sweet one.

Moreover, lassi is also very healthy. It is rich in good bacteria that heal the stomach and promote a healthy gut. Also, the calming effect of lassi helps you avoid sunstroke. Usually, it is served in huge glasses and topped with cream or butter to make it even richer. 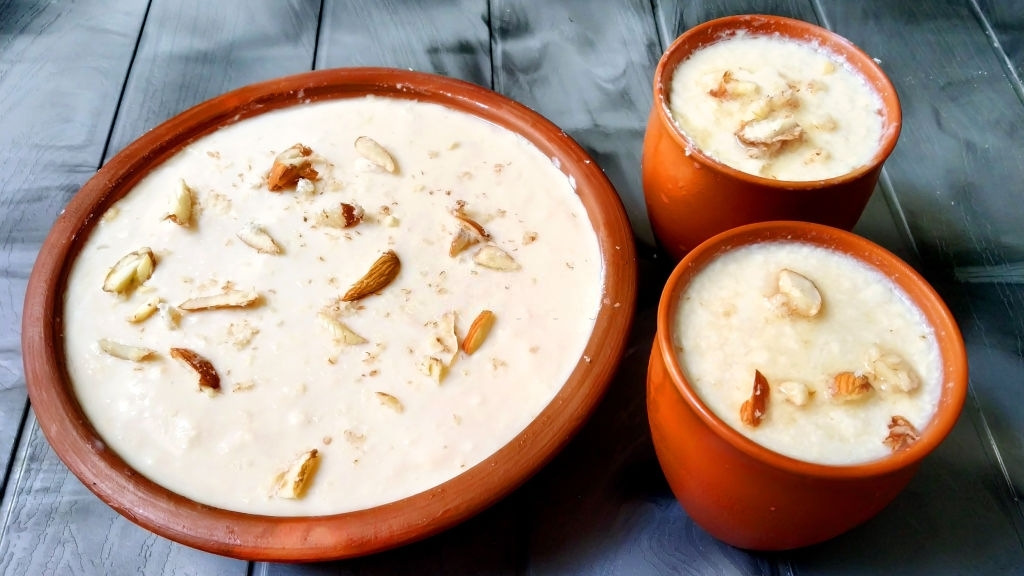 Phirni is a favorite Punjabi food, served on special occasions. It is a thick and creamy rice pudding dish made from rice, milk, sugar, cardamom, and sugar-infused with cardamom.

Also, it is topped with crushed pistachios, this dish is rich in vitamin A and calcium. Moreover, proteins and calcium in this delightful, sweet dish keep bones strong and the body healthy. Certainly, this meal is an excellent addition to an infant’s diet.

No doubt, Sindh is famous for its rich culture. Sindhi cuisine is popular for its rich flavors, great taste, and use of aromatic spices. In most Sindhi households, the daily diet consists of wheat-based flatbread (phulka) and rice served with two types of sides — a large portion of gravy and a small amount of dry with curd or pickle.

In the present day, Sindhi Food is popular in many countries, including India, where many Hindu Sindhis migrated after gaining independence in 1947.

You will find some most famous Sindhi foods below:

Koki is a common breakfast item among Sindhi people. It is similar to paratha but with a few additional ingredients. Wheat flour is used for making this flatbread with finely chopped onions, green chilies, and coriander leaves.

What’s more, it is a healthy breakfast item. Indeed, it is an excellent choice for health-conscious people. This mouthwatering dish goes well with curd, pickle, and tea.

Moreover, Koki can be a great low-fat, low-sugar option to eat with your Dal too.

Sindhi pulao is a traditional Pakistani dish hailing from the province of Sindh. In many ways, it is similar to Sindhi Biryani, but they both are entirely different dishes. It is made by combining all ingredients and cooking them with water or stock until the liquid is fully absorbed.

On the other hand, Sindhi Biryani involves preparing the ingredients individually and then cooking them together in layers. It uses fewer spices than the Biryani, which is highly aromatic and flavor-packed when it comes to spices. However, both dishes are staples in Sindhi households.

Sai means green, and Bhaji indicates vegetables, thus the name of the dish. It consists of spinach, potato, cauliflower, carrot, tomato, garlic, cumin seeds, ginger, and onion and is highly nutrient-dense. Certainly, an excellent way to consume spinach is by preparing this recipe.

It is known for its high fiber and protein content. If you are conscious of your weight, this is a great dish. Diabetes patients can also enjoy this dish.

There have always been many tourists attracted to the KPK because of its distinctive culture and fascinating places. Food lovers in Peshawar can enjoy a top-quality food street at Ghanta Ghar.

As a matter of fact, it is one of the most well-known places to enjoy good food with family.

Below are some mouthwatering dishes you can enjoy fulfilling your food desires.

Dum Pukht is a popular dish served in Peshawar, made with either mutton or beef. You can cook meat at a low temperature in its fat with onion, cardamom, potatoes, yogurt, red pepper, garam masala, salt, garlic paste, oil, and cardamom.

It is a tasty dish made in one and a half hours, and you can enjoy it with Tandoori Roti.

Chapli kabab is a type of Kebab prepared with meat from either beef or mutton. Also, the people of KPK call it Peshawari Kebab. Indeed, they’re delicious and spicy kababs of Pakistan.

Balochistan is the largest province in terms of land area, and Quetta is its capital. Balochistan is very famous in this area for providing a good variety of Balochi food and other Pakistani dishes.

The food is famous for its extraordinary taste as well as the way the cooking takes place.

Below are a few of the tastiest and delicious dishes of this area:

Balochistan’s Sajji is a popular dish made from the whole lamb. Traditionally, Balochi sajji comes with rice, while in some cities, it is available without it. Indeed, it is popular throughout Pakistan.

Rice and meat together make this dish so delicious that it is hard to resist.