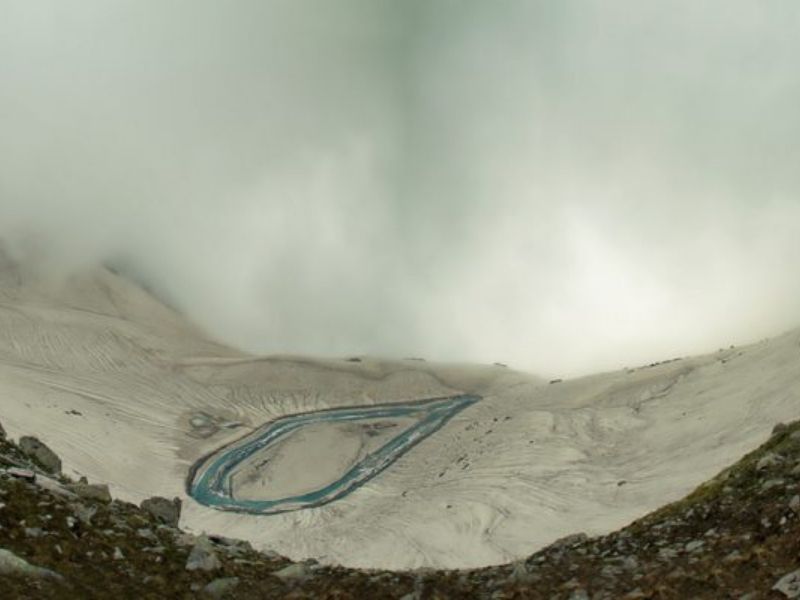 Pakistan is a land of valleys, mountains, lakes, and breathtaking landscapes. The northern region of the country is particularly famous for its scenic views of mountain ranges and picturesque valleys. Pakistan is also home to five out of fourteen tallest mountains in the world. The famous mountain ranges of Pakistan include the Himalayas, Karakoram, Nanga Parbat, and Hindu Kuch. These mountain ranges are home to many world-renowned lakes, one among them is Ansoo lake.  If traveling to Nar, you can add it to your bucket list.

Ansoo Lake is an extremely beautiful lake that is in the shape of a teardrop. It is present at an extreme height of 14000 ft in the Himalayas Range in Kaghan valley. The Urdu word “Ansoo” means tear and it is named owing to its spectacular teardrop shape. After its accidental discovery, the locals came up with many interesting stories about how it emerged. The natural reservoir is also not easily approachable throughout the year.

The tourism industry is flourishing in Pakistan at exponential rates. Thousands of national and international visitors particularly flock to Naran Kaghan Valley or travel to Hunza from Islamabad to escape the scorching heat of summer. If you are a nature lover or trekking is your hobby, you must visit Ansoo lake at least once. Here, we will describe the interesting story of how Ansoo lake was discovered and the urban legends associated with it. 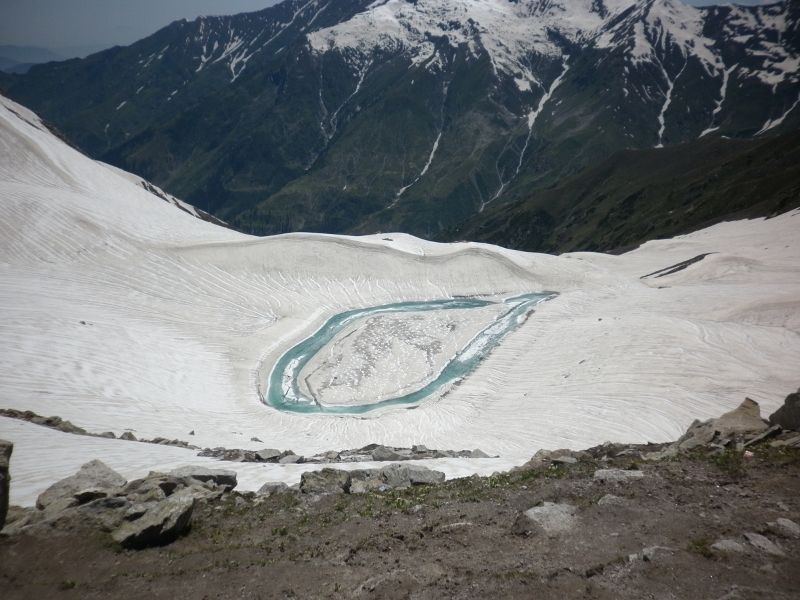 Image of Ansoo Lake from Google

Ansoo lake (the Urdu word Ansoo literally translates to tear) is present in the Mansehra district of Kaghan Valley in Pakistan. The lake is at an altitude of 13,927 ft from sea level. It is among the highest lakes in the world with extremely dangerous trekking trails. The highest mountain of Kaghan Valley, Malika Parbat, is also adjacent to Ansoo lake. The lake takes its name from the shape that interestingly makes a huge teardrop at the top of a mountain.

No one knew about the existence of Ansoo lake until the early 1990s. It was accidentally discovered by  Pakistan air force Pilots in 1993. They were flying at a very low altitude and came across the breathtaking view of the teardrop lake in the Himalayas range. By the time it was found, visitors were familiar with another Saif ul Muluk lake.

Ansoo Lake is also accessible during the summer season. Despite its height and difficult trail, many adventure lovers summit 1400 ft to see this amazing natural water reservoir.  Now that you are familiar with the Ansoo Lake history, let’s dive into the Ansoo lake story that locals, quite interestingly believe, is true. 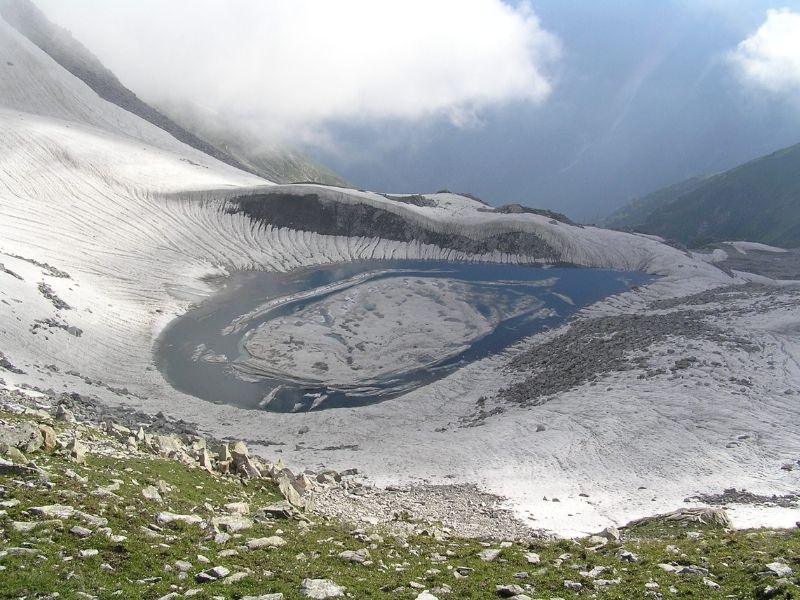 Photo of Ansoo from Google

Pakistan is a country of diverse cultures, languages, and ethnicities. The stronghold in history and tradition normally gives birth to interesting myths and folklore in the region. The history of Ansoo lake originates from one such urban legend that is both mystical and extremely fascinating.

The story about how Ansoo lake emerged is as fascinating as the lake is itself. So, there was this prince, Saif ul Malook, who fell in love with a fairy. The name of the prince must ring a bell as it is another famous and extremely beautiful lake present in Kaghan Valley. Coming back to the story, the budding love between prince and fairy was not an acceptable affair. According to folklore, humans were not allowed to marry fairy people. That made things a bit tricky for the prince as he had to endure many trials and tribulations for at least 12 years.

The story does not end here, as there was a Giant Safiad duo too. He was the villain of this story, As he could not bear to lose a pretty fairy to a human prince. To prevent the fairy from marrying the prince, the giant kidnapped her. But no matter what he did, he could not sever the bond that fairy and price have developed.  Finally, he began to sob out of rage, failure, and despair. His continuous crying gives rise to the beautiful Ansoo lake that you can now visit. 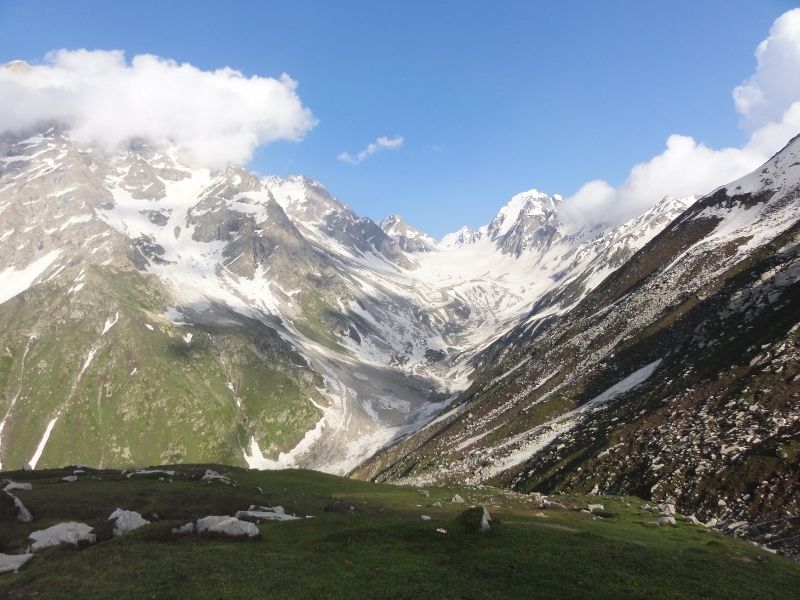 Now, the first thing that you ask yourself is how to get to this spectacular lake. The trek to Ansoo lake is perilous, tough, and very risky. You can also only stay for around 20 min to observe that amazing lake and take pictures when finally the clouds dissipate. Here, we will discuss different routes that you can take to reach Ansoo lake.

The first trek that you can take is from Saif ul Muluk, which is at the distance of 7.1 Km from Ansoo lake. You can travel to Naran on your personal vehicle or use public transport. From there, you can hire jeeps and research Saif ul Muluk. You can hike to the lake as well, but it is not recommended if your final destination is Ansoo Lake. The trek of Ansoo lake is very steep and covered with snow patches at various locations. The ideal time to start your journey for Sailf ul Muluk is 6:00 in the morning.  From there, it takes around 7-8 hrs of a round trip to reach Ansoo lake.

This trek can be divided into two halves. You can also hire ponies and guides that can prove very helpful along the way.  The first half from Saif ul Muluk consists of the waterway. It will take you all the way to the Malika Parbat base camp. The second half is dangerous and comparatively more extreme. It includes trekking on the snow-covered mountain even in the summer season.

The second route for Ansoo lake starts from Village Mahandri. The village is present at a distance of 25 miles from Naran. From there, you can book a jeep for Village Mahnoor that is a treat for eyes in itself. It is an extremely beautiful region with greenery and mountains surrounding the area. From here on, the mode of traveling changes to trekking.  After a journey of 7 hrs, you will end up in a lush green meadow, named Dher. However, you will need to trek for an additional 3-4 hours to finally reach gorgeous Ansoo Lake.

As mentioned earlier, Ansoo lake is only approachable during the months of June, July, August, and  September. It is present at a height of approximately 1400 ft from sea level, so the temperature is generally low. The temperature can go as low as -20° C. During winters, the weather is harsh, the trek is impossible, and the lake is completely covered with ice. Even the locals prefer to avoid treacherous terrain during winter. Therefore, it is better to plan your trekking to Ansoo lake during the summer season.

Below, we have answered some of the most frequently asked questions about different lakes in Pakistan.

What is the height of Saif ul Malook?

Saif ul Malook is a mountain lake present at an elevation of 3,224 m (10,578 feet) from sea level. The lake is situated in Saif ul Malook National Park, near Naran Town, at the northern end of Kaghan valley. Glacial till blocked that passage of water streams passing through the valley and that resulted in Saif ul Muluk Lake. The picturesque view of the lake surrounded by wondrous mountains attracts many tourists each year.

Which is the largest lake in Pakistan?

Manchar Lake is the largest lake in Pakistan, with an area of 260 square kilometers (100 square miles). It is also the largest lake in South Asia. Manchar Lake is situated to the west of the Indus River in Sindh. Present in the Kirthar mountains, it collects water from several passing streams. Th eventually falls into the Indus river. Numerous archeological sites are present on the bank of Manchar Lake such as Ghazi Shah, Lal Chatto, and Mashak Lohri.

How many lakes are in Pakistan?

There are approximately 60 lakes in Pakistan that are either natural reservoirs or appear out of human activity. All lakes are famous for their distinctive location and picturesque landscapes. Lake Saif ul Muluk, Attabad lake, Ansoo lake, Banjosa lake, Mahodand lake, Lower Kachura or Shangrila lake is among the most famous lakes of Pakistan.

Which is the deepest lake in Pakistan?

As per our research, Attabad lake can be considered the deepest lake in Pakistan. Over the period of time, the difference between inflow and outflow of water caused the lake to store large volumes of water. It stands at a depth of 109m (358 ft). The lake emerged as a result of the Attabad accident that took place in 2010. The breathtaking view of the lake and recreational activities like boating attract huge crowds of tourists each year.

In this article, we have discussed one of the most gorgeous lakes of Pakistan, that is Ansoo lake. Despite being at such a high altitude, many nature lovers tend to summit it each year. The incredible and precise tear-shape of the lake is simply a natural wonder. If you find this article helpful for traveling, or if it added to your general knowledge, please do leave your feedback below.

Welcome to Roaming Pakistan! Our mission is to create, develop, and maintain a platform in service of Pakistan’s tourism industry. A platform that exists to offer useful, accurate, and reliable information to people travelling in Pakistan.

Welcome to Roaming Pakistan! Our mission is to create, develop, and maintain a platform in service of Pakistan’s tourism industry. A platform that exists to offer useful, accurate, and reliable information to people travelling in Pakistan.